The SYNTECH ServoSphere is functionally similar to the locomotion compensator for insects first constructed and described by Kramer (1976). As the Kramer Bowl the SYNTECH ServoSphere also consists of a sphere, on top of which the insect is placed, and which is rotated opposite to the insect’s displacements by means of two electric motors. The motors are driven by electrical commands proportional to the displacement of the insect measured by an optical detector located above the insect. Two encoders orthogonally contacting the sphere transmit the rotational movements to a computer, where the displacements are stored as incremental X and Y coordinates. It is proven that such a device could be very useful and can be used in a wide range of orientation experiments (Kramer, 1976, Weber et al.,1981;Tobin and Bell,1986) and allows manipulation of the insect’s environment over long periods and in an unlimited virtual area. Although the method of the original Kramer-Bowl is straightforward and very attractive as a research tool it is not widely applied because of the complicated construction, difficult operation, and high cost. Moreover, there is a risk for contamination of the sphere surface when using high concentrations and sensitive insects. But the biggest drawback is the need of a tiny reflector that has to be applied onto the back of the insect for the displacement sensor to work properly.

The design of the SYNTECH ServoSphere aims to overcome several of these weaknesses of the conventional „Kramer-Bowl“:

Actually the SYNTECH ServoSphere comes in three different sizes, with 100mm, 300mm or 770 mm diameter of the sphere.

The LC-100 is a ‚mini‘ ServoSphere supplied with interchangeable spheres of 100 mm diameter in different colours. As in all models the displacement of the test animal is measured by a CMOS sensor. In the LC-100 this sensor is mounted on the video tubus of a triocular stereo zoom microscope and as in the other versions of the ServoSpheres the detection of the animal is based on contrast against the uniform colour of the sphere, and the test animal does not require any preparation.

This ‚mini‘ ServoSphere is especially designed for the observation and tracking of small to very small organisms like ticks, mites, aphids, etc. ranging from 0.05 – 1 mm. 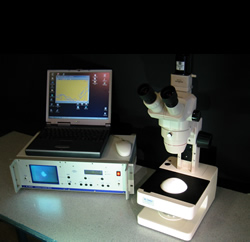 The LC-300 is a compact stand-alone ServoSphere supplied with interchangeable spheres of 300 mm diameter. The displacement of the test animal is also measured by a CMOS sensor equipped with a macro-zoom lens. A ring light can be mounted on the optics which can deliver visible or infrared light which makes it easy to operate the ServoSphere in the dark. The LC-300 is suitable for animals ranging from1 – 10 mm.

The LC-770 is a very new version using the same principle of operation. Due to the big size of the sphere itself the total set up can not be used on the desktop anymore. Despite all these improvements successful operation of the SYNTECH ServoSphere, either the LC 100, LC 300 or LC 700 requires the operator to be well familiar with the principle of operation, the various adjustments to be made, and the experimental limitations of the system. It is recommended to ‚play‘ with the instrument until sufficient experience has been gained to perform explorative experiments.
© 2018 Ockenfels Syntech GmbH | Impressum | Privacy Policy
nach oben
This website uses cookies to improve your experience. We'll assume you're ok with this, but you can opt-out if you wish. Accept Reject Read More
Privacy & Cookies Policy
Notwendig immer aktiv